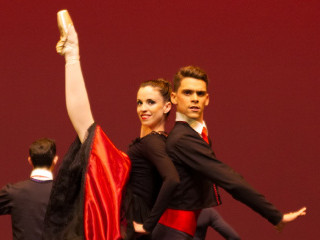 Suite of Don Quixote Synopsis:
Based on Miguel de Cervantes' sweeping tale of romance and chivalry, this fresh new adaptation features the misadventures of the knight-errant of La Mancha and his devoted sidekick, Sancho Panza. Driven by the vision of Dulcinea, the ideal woman, the tarnished (yet inspired) Don Quixote begins his adventure with his trusty squire Sancho Panza, in tow. He believes he recognizes in Kitri his "loved and idealized" Lady Dulcinea. Kitri, Lorenzo's daughter, is in love with Basilio. A tale of romance, bravery, and fantasy is brought to life by the world-class Alma Dance Theater, NFP.

Mrs. Miklosovic is a current dancer at  BalletMet Company in Columbus, Ohio.  She received recognition from several international ballet competitions such as the World Ballet Competition in 2017, earning a gold medal. Mrs. Miklosovic earned top honors at the 2015 and 2016 Youth America Grand Prix and she earned the Morning Star Foundation Award at the China IBCC.  Additionally, she earned top-three at the National Society of Arts & Letters 2017 En Pointe Classical Ballet Competition. Mrs. Miklosovic was also named one of Dance Magazines, “25 to Watch” in 2019.